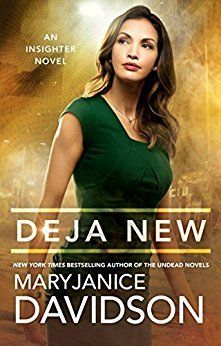 Leah Nazir lives in a world where the past can and will come back to bite you in the ass. No, not teething ghosts—reincarnation! As an Insighter, it’s Leah’s job to delve into the murky and (often) deadly former lives of her patients. And she knows a thing or two about danger after killing her mother’s murderer with the help of new beau, Archer Drake.

Isn’t he the best?

Now, it’s time to take their relationship to the next level, but not in any way Leah could have predicted. She and Archer head to Chicago to meet his parents—and try to figure out why Archer’s dad killed his brother decades ago. When someone tries to sabotage their investigation, Leah must decide if the Drake family past is a deal breaker…

I appreciated the second installment to this series more than the first because I felt like there was more depth this time around verses what we got in the first book however that depth also caused quite a bit of confusion as well. The past verse present lay over dialogue was a tad complex for me as the reader as well as poor Leah.

I still enjoy the new concept as the whole reincarnation thing isn't often used in romance I would like to see more of it in the future.

Confusion aside I felt Davidson did a much better job bringing the reader in this time around, making it worth a revisit to this series. My interest in the third installment is also piqued.

Krissys Bookshelf Reviews received a digital copy in exchange for an honest review from Berkley Publishing.