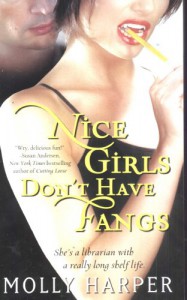 Maybe it was the Shenanigans gift certificate that put her over the edge. When children's librarian and self-professed nice girl Jane Jameson is fired by her beastly boss and handed twenty-five dollars in potato skins instead of a severance check, she goes on a bender that's sure to become Half Moon Hollow legend. On her way home, she's mistaken for a deer, shot, and left for dead. And thanks to the mysterious stranger she met while chugging neon-colored cocktails, she wakes up with a decidedly unladylike thirst for blood.

Jane is now the latest recipient of a gift basket from the Newly Undead Welcoming Committee, and her life-after-lifestyle is taking some getting used to. Her recently deceased favorite aunt is now her ghostly roommate. She has to fake breathing and endure daytime hours to avoid coming out of the coffin to her family. She's forced to forgo her favorite down-home Southern cooking for bags of O negative. Her relationship with her sexy, mercurial vampire sire keeps running hot and cold. And if all that wasn't enough, it looks like someone in Half Moon Hollow is trying to frame her for a series of vampire murders. What's a nice undead girl to do?

I cannot get enough of this book, seriously. Nice Girls Don't Have Fangs is hilarious, its sweet and I cannot believe it hasn't been turned into another vampire tv series. Dick supporters need to rally together and get this on air. Go Dick! I love how Jane finds herself a part of the undead community I mean talk about a really bad day.

I really enjoyed the humor and author personality that is just unique to itself. Harper is a great writer. Granted its not an epic scale journey kind of thing but its the small friendships the little every day life thing that keeps this story reality based. Its keeping a small job, balancing your new life, hiring others in the community in your small town area and making a mark with the little bookstore and the relations between those they trust and those who are out to do harm.

I read Nice Girls Don't Have Fangs after receiving a recommendation from Debbie's Spurts.

Krissys Bookshelf Reviews purchased a print copy for personal collection. All thoughts, comments and ratings are my own.