Fan the Flames (Search and Rescue #2) by Katie Ruggle 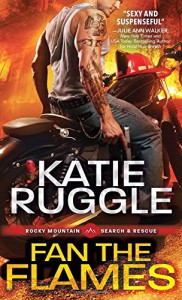 In the remote Rocky Mountains, lives depend on the Search & Rescue brotherhood. But in a place this far off the map, trust is hard to come by and secrets can be murder...

As a Motorcycle Club member and firefighter, Ian Walsh is used to riding the line between the good guys and the bad. He may owe the Club his life, but his heart rests with his fire station brothers...and with the girl he's loved since they were kids, Rory Sorenson. Ian would do anything for Rory. He'd die for her. Kill for her. Defend her to his last breath-and he may just have to.

Every con in the Rockies knows Rory is the go-to girl for less-than-legal firearms, and for the past few years, she's managed to keep the peace between dangerous factions by remaining strictly neutral. But when she defends herself against a brutal attack, Rory finds herself catapulted into the center of a Motorcycle Club war-with only Ian standing between her and a threat greater than either of them could have imagined.

To start off I think the biggest thing that prevented me from rating this book give stars was that it felt too busy. It was trying to be too many things at once by trying to do the multi - personality / career / interest thing. The story had enough focus for it to be one thing instead of many however the cast really carried the rest of the book for me and that's what kept my interest. The second thing I'd like to add Ian can search and rescue me any time any day. He's a delicious morsel I enjoyed savoring. I really thought when I started this book he would be the anti hero kind of guy but turns out that's all he is. Good guy caught up in the bad boy world. Don't be fooled though he's no one to mess with but I never really bought his bad guy thing. He is fab.

Had a great time reading Fan the Flames and would totally suggest it to anyone that loves fun MC / Rescue hero reads.

Source:
Received a digital copy in exchange for an honest review from Netgalley.