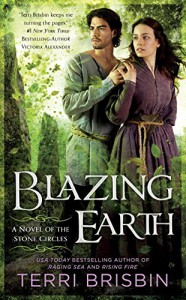 Tolan of Durlington is a farmer whose ancestors have tended the same lands for centuries with astonishing success. His hope for the future is that his son—and his sons yet to come—will carry on the traditions. But, his carefully laid plans are shaken by the village healer he’s come to love.

Unable to bear children, Elethea can offer Tolan only companionship and physical comfort. When hidden powers in their blood—powers to command the fertile earth, to draw from the healing sun—explode into being, their world and lives are changed forever.

Soon, the fate of humankind is in their hands as the wrathful goddess grows closer to escaping her prison and destroying the world as they know it. Battling the goddess’ followers and their own fears, can these two lovers protect mankind and still survive to find their own future?

Blazing Earth was on an entirely different level than the previous installments of the Stone Circles series. Its more intense its more somber its more everything. Blazing Earth takes everything we've established in the previous books and turns it on its head. Honestly I really enjoyed Brisbins bravery to take such dramatic risks but it pays off in really big ways. Granted a lot of it is emotional but its all fantastic. I am glad that Brisbin wasn't afraid to go places that often landed in the shady spots and questionable areas. I really enjoyed reading Blazing Earth from beginning to end, and by itself tied me to the series in a personal way. I felt that Blazing Earth was Brisbin's best work yet, and I look forward to reading Brisbin's following installments.