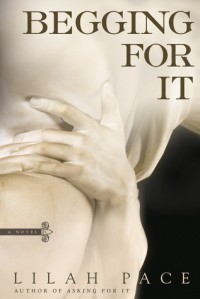 Jonah and Vivienne’s erotic bond—living out raw scenarios of captivity and force—began as no-strings sex between strangers who shared the same desires. Now the intimacy between them is turning into love, but it’s a love built on fantasies so extreme that exploring them makes guilt inescapable. But the risks they're taking are far more dangerous than they'd imagined.
A stalker is terrorizing the city, and one of Jonah’s ex-lovers names him as a potential suspect to the police. Standing by a man under suspicion could cost Vivienne everything. But when Jonah’s stepfather takes advantage of the scandal to seize control of the Marks family fortune, Vivienne is drawn into her lover’s broken family and twisted past. Only then will she learn how dark the truth really is..

Review:
I started off as a larger fan of the first book because at least there was a form of normalcy but to me the second book committed suicide. This took fantasy strapped it to a bulldozer and rammed it into a wall until all you're left with is the rubble of what was once a fairly nice establishment.
I mean I finished Asking for It in a couple hours while Begging for it took me over a month to finish because I spent so much time just being sick to my stomach.
I used to genuinely like Viv - granted she had her issues but she wasn't the person she has become in this installment and while we are on the topic of issues I seriously think her therapist needs to be fired from her job. Effective immediately. Like what the fuck?
I have to give the author credit for nearly making me nearly hurl on my couch before I had to heave in my bathroom for twenty minutes because not many people have the ability to evoke strong emotion in a reader so cheers to that however that wasn't the feeling I was hoping to return to when I opened up this book.
I know so many people are going gung ho on Viv and her fantasy play but when did she become this horrible selfish self centered childish emotionless manipulative monster lashing out to get what she wants and to get her way?
I really liked Viv in the first book, she was a person you could feel for, relate to and as a person really like only now shes careened off a cliff into crazyville. Who is this person?
I didn't care for this book at all. I didn't appreciate the hate mongering toward a man that only wanted to make her happy and practically give up his soul to fulfill her every whim.
I didn't like the relationship dynamic, I didn't like the reasoning or frankly any of it. And stalker? Seriously? This story didn't need more added to it. Horrible.


Note: I received a digital copy in exchange for an honest review from Berkley
Tweet