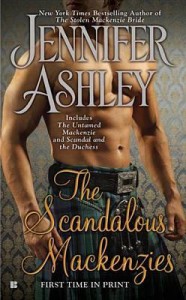 The Untamed Mackenzie
When Lady Louisa Scranton of the decadent Scottish Mackenzie family is accused of murder, Detective Inspector Lloyd Fellows of Scotland Yard, vows to clear her name. He’s already shared kisses with Lady Louisa, and not only is he convinced of her innocence, he’s falling for her. And while he may be the only hope of restoring her family’s honor, he intrigues Louisa in a way that may be even more scandalous than murder.

Scandal and the Duchess
Scandal follows Rose Barclay, young widow of the Duke of Southdown, wherever she goes. And now she’s been kicked out of her rightful home. But the dashing Scot Steven McBride—a decorated soldier who is notorious for heavy gambling and womanizing during his leave time—comes up with a ruse to foil the journalists and save Rose’s inheritance. But Rose will have to go along with his very scandalous proposal.

Includes a teaser of Jennifer Ashley’s The Stolen Mackenzie Bride

The Scandalous Mackenzies is a paperback anthology out now in stores! It brings together the previously e-only Untamed Mackenzie (Fellows' story) and Scandal and the Duchess (Steven McBride's story).